When does the vinyl come out?

In 1948, Columbia Records introduced the 12-inch polyvinyl chloride record at 33 rpm. Called LP (acronym for long play or ‘long duration’), it has two longer sides (up to 45 minutes each) and less surface noise.

The following year, 1949, RCA Victor introduced the 7-inch polyvinyl chloride record at 45 rpm. Called single, it has two sides with a recording on each side. In 1952, a variation, the EP (extended play), supports up to two songs per side.

Composition by Parker himself, master of bebop jazz. It was one of the first recordings on the new long-lasting vinyl records.

Charlie Parker was an American jazz saxophonist and composer, born in Kansas City in 1920. Nicknamed Bird, he is considered the best alto saxophonist in the history of jazz and one of its great innovators. Together with Bud Powell and Dizzy Gillespie, he is the initiator of bebop, a style that breaks with the swing of the great orchestras and is based on improvisation over a melody by modifying the chords, thus creating new melodies over the structure of the songs.

What kind of music did it contain?

At first, the long-lasting vinyl record, invented by Dr. Peter Goldmark and his team, was more suitable for recordings of large works. It opened up the market for classical music and new styles of jazz such as bebop.

Among the best-selling records in that year, 1948, we find Gershwin’s Rhapsody in Blue (1st), Tchaikovsky’s The Nutcracker (2nd) and Beethoven’s Fifth Symphony (3rd). A total of two million elepses were sold that year. 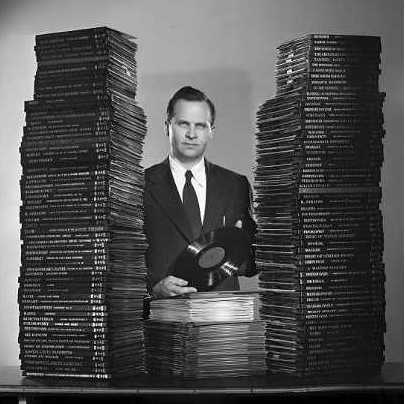 Work composed by Piotr Tchaikovsky, in 1892, for The Nutcracker It appeared on one of the best-selling records of these early vinyl records.

Peter Carl Goldmark was born in Budapest (Hungary) in 1906 into a family of scientists and musicians. He studied engineering at the Technical School of Berlin and physics at the University of Vienna. In 1936, he moved to the United States, where he was recruited for the CBS laboratories. He was a prominent inventor and businessman who registered more than 150 patents. Particularly noteworthy are those obtained for the invention of the LP and the color television system.

What about the first singles?

The 7-inch single at 45 rpm, being of short duration, was very useful for single songs, especially the hits of the moment. It was the indispensable format for slot machines and radio stations.

In its early years it served to consecrate great successes of musical comedies in vogue on Broadway, such as: South Pacific or My fair lady. Later on, it will promote other musical trends such as rock and roll.

Song composed by country musician Fred Rose. It was one of the first vinyl singles to go on sale, released by RCA on March 31st of that year, in the United States.

Richard Edward Arnold was born in Henderson (Tennessee), in 1918. Nicknamed “The Tennessee plowboy”, he was educated in the countryside and from childhood was devoted to country music. During his twenty-one year career, he recorded over 140 albums, of which over 85 million copies were sold. He performed universally popular songs and became a perennial star. He managed to be among the top ten in the charts for fifty-eight consecutive times.