What did Elvis represent?

Before the appearance of Elvis, there were already many young performers looking for their own language through rock and roll. Carl Perkins, Chuck Berry, Fats Domino or Little Richard have gone down in history as their great masters.

But the figure of Elvis Presley had a much greater impact. He represented the incarnation of rock and roll. He soon became the king of the genre and the role model for thousands of young people around the world. 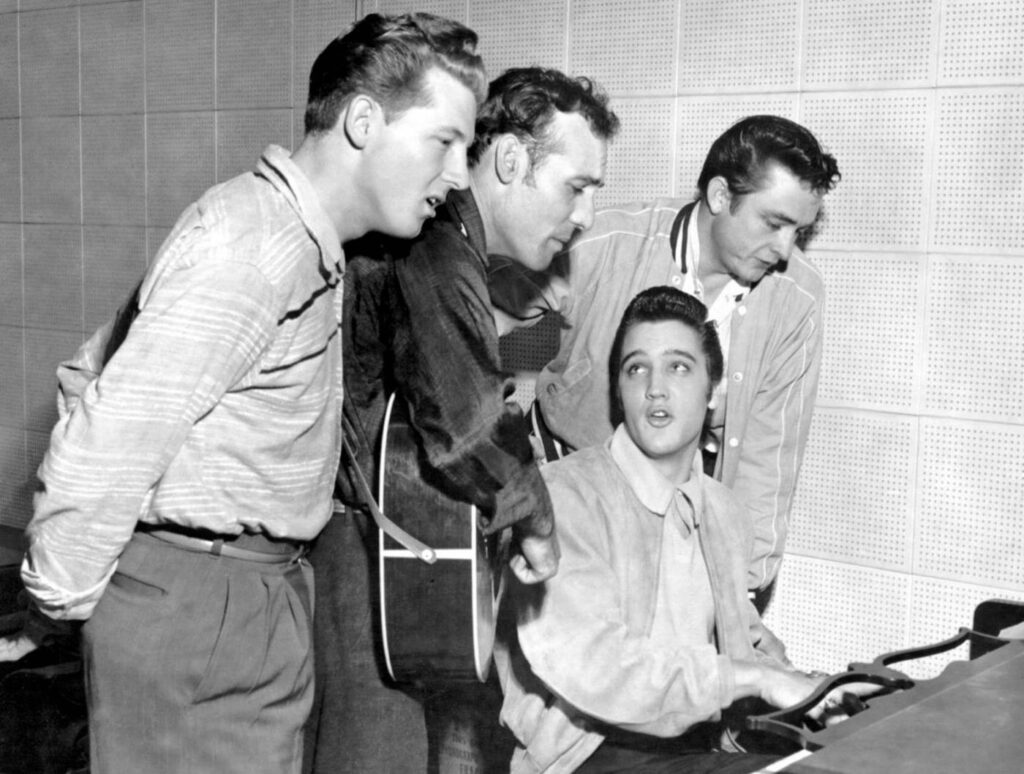 The Million Dollar Quartet – Down by the Riverside (1956)

Version of an anonymous African-American spiritual from the time of the Civil War. We heard it from the first supergroup in the history of rock.

The Million Dollar Quartet is the name given to a recording session held on December 4, 1956, at the Sun Records studios in Memphis, Tennessee. It was an improvised jam session between Elvis Presley, Johnny Cash, Carl Perkins and Jerry Lee Lewis. It happened when, by pure chance, the four of them met in the studios and went over some popular songs together. Sam Phillips, owner of Sam Records, recorded the session to, according to him, capture the moment for posterity.

What role did he play?

Fate put Elvis in the eye of the hurricane of a music wrap. He was the catalyst for a new form of expression that caught on quickly in a generation that had not experienced World War II.

With a distinct physical presence and a turbulent voice, Elvis opened the way for other pioneers, black and white, to follow, shaping early rock and roll and breaking the barrier of racial segregation in the process.

Song composed by Junior Parker, also known as Mr. Blues. In this version Elvis reinterprets it in a rockabilly key, making it a classic of the style.

Herman Parker was born on the Eastover plantation near Bobo, Mississippi, in 1932. He spent his early years singing gospel and playing the harmonica with various blues artists, including B.B. King. In 1951, he formed his own band, The Blue Flames, featuring guitarist Pat Hare. Recorded by Sun Records in 1953, Hare’s technique, compositions and guitar riffs were the basis for the first recordings by rockabilly artists, and are considered to be the forerunners of the style.

Why is this generation so important?

When the market opened, many rhythm and blues soloists, until then limited to race music, discovered ways to ingratiate themselves with the white audience who knew their songs through other versions.

After Elvis Presley and other masters, thousands of aspirants arrived, forming a whole generation of rockers. Years later, they would influence the British music scene, to whom they gave the baton of rock and roll.

Rockabilly song composed by Eddie himself with his girlfriend, Sharon Sheeley, and his brother, Bob Cochran. A young contemporary of Elvis who marked British musicians.

A high percentage of Americans identify spiritually with Elvis Presley, even though numerous books published after his death give an unpleasant view of his existence. Proof of this is the constant pilgrimage to his grave in Graceland. Through Elvis and his contemporaries, rock and roll fired the imagination of millions of young people. Buddy Holly, Jerry Lee Lewis, Gene Vincent, Eddie Cochran made up the main body of the second wave of rockers.