Were there original offers?

Screamin’ Jay Hawkins was an aspiring opera singer who turned his career around to rhythm and blues. With humor, circus performances, and a sometimes macabre aesthetic, he set a precedent and challenged the social conventions of the day.

Larry Williams was signed to Specialty Records as Little Richard’s successor. But in his records he mixes a personal voice and strange lyrics with the intensity of a raw piano and whistles. All this makes his work original.

Theme credited to Hawkins himself along with Herb Slotkin. A classic that begins as a blues ballad and turns into something wilder, full of great humor.

Jalacy Hawkins was born in Cleveland, Ohio, in 1929. Like her play, her life was a show. While learning composition and piano at the Ohio Conservatory, she dreamed of becoming an opera singer. After being a prisoner of the Japanese army in World War II, he became a boxer and blues pianist. His extravagant wardrobe included leopard skins, red leather, or bold hats, which was a challenge to the social conventions of the day in the very conservative Eisenhower era.

Who were the youngest?

Ritchie Valens was an Indian-Mexican from Los Angeles. A quintessential Latin rocker, he was the forerunner of Chicano rock. He was familiar with traditional Mexican music, flamenco and rhythm and blues. His career, though short, was successful.

Jiles Perry Richardson, better known as The Big Bopper, was a Texan who stood out as a performer and composer. He died alongside Buddy Holly and Ritchie Valens on what is known as the Day the Music Died 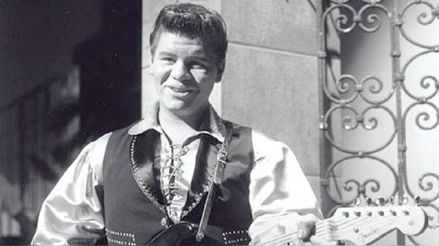 Own song in which Valens adds a rock and roll rhythm to a popular Mexican song. With it he became a pioneer of the Chicano rock movement.

Richard Steven Valenzuela Reyes was born in Pacoima, Los Angeles district, in 1941. The son of Mexican immigrants, he learned to play the guitar on a self-taught basis. At the age of sixteen he made his debut with the doo wop group The Silhouettes. Nicknamed the Little Richard regional, he was discovered by Bob Keane, owner of the Del-Fi Records company. Keane got him a backup band and changed his original name to Ritchie Valens. Unfortunately, his career only lasted a few months.

Who were remarkable in rockabilly?

Johnny Burnette was a neighbor of Elvis Presley in Memphis, whose image and charisma he admired. Together with his brother Dorsey and a friend, in 1955 he formed the Johnny Burnette Trio, a wild rockabilly band with a distorted guitar.

Eddie Cochran was a good guitarist and superb vocalist. Supported by producer Jerry Capeheart, he is the creator of pop music awareness. This concept will permeate deep into British bands of the sixties.

A theme born of the collaboration between Cochran and Jerry Capeheart. Their songs are about the experiences and tribulations of American teenagers’ lives at the time.

Edward Ray Cochrane was born in Albert Lea, Minnesota, in 1938. He began his musical career in 1955 with the country and rockabilly duo The Cochran Brothers. Shortly thereafter, he met the composer Jerry Capehart, who got him a contract with Liberty Records. His first recordings were not successful, but from 1957 onwards he surprised everyone with a new sound that helped shape rock and roll. He died in a car accident during a tour of the United Kingdom in 1960. A promising figure, he immediately became a legend.