How does rock and roll make its debut in the movies?

The first time in which cinema was mixed with rock and roll was in the movie Rock Around the Clock (1956). Its director, Sam Katzman, showed that there was business in presenting a few performances with a basic script.

Soon after, the industry would discover the same thing with Elvis Presley. His followers did not want a masterpiece; it was enough that the king appeared radiant and sang a few jewels of his repertoire. 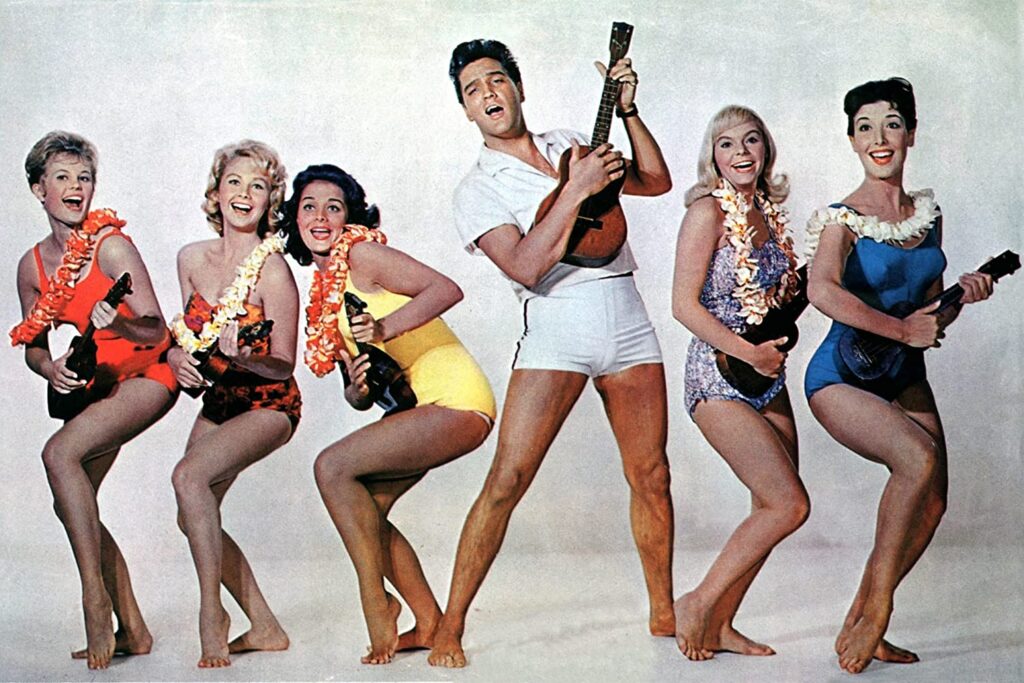 A song composed by Leo Robin and Ralph Rainger. It is the theme that opens the soundtrack of the movie of the same title. This musical comedy was the most successful of his films.

Blue Hawaii was the first of three films that Elvis recorded in Hawaii, followed by Girls! Girls! Girls! (1962) and Paradise, Hawaiian Style (1965). Elvis appeared in a total of 34 films, 3 of which were documentaries. All produced between 1956 and 1977. Among the most popular ones are Jailhouse Rock (1957), King Creole (1958) or Viva Las Vegas (1964). Elvis always declared that his dream was to stop singing and become an actor like James Dean or Marlon Brando, as he said he felt represented by them.

What about teen idols?

Later, Hollywood launches dozens of low-cost films portraying the idols of records to the youth market. These are crazy stories in which you can guess the outcome in the very first five minutes.

Among them, the so-called beach movies stand out. Starring teenage artists like Frankie Avalon and Annette Funicello, they showcase the carefree lifestyle of the emerging high school subculture. 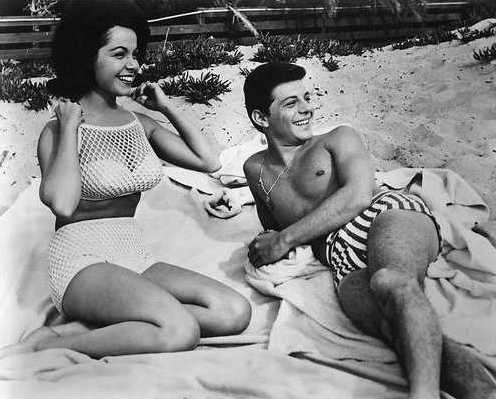 A song composed by Gary Usher and Roger Christian. It was the main theme for the film of the same title that became the reference of a new sub-genre of feature films.

The so-called beach films were created by the production company American International Pictures (AIP). They had their best time between 1963 and 1968. Beach Party was the first in a series of films starring the Avalon-Funicello couple. It was followed by Muscle Beach Party, Bikini Beach, Beach Blanket Bingo, How to Stuff a Wild Bikini, and Pajama Party. Before she became a teen idol, Annette Funicello was the most popular member of the Mickie Mouse Club, where she co-starred several series and became known as a singer.

How did it help?

As it appeared in Blackboard Jungle (1955), Hollywood spread rock and roll internationally. But then, they transformed it into a great business by including fashion artists in opportunistic films.

In general, those movies which starred rock and roll stars made money for their creators, they amused the audience and promoted music. There were also Apollonian actors who jumped from cinema to teenager music.

A song composed by the twins Claude and Cliff Trenier. It appears in the soundtrack of the movie The Girl Can’t Help It, a musical comedy about the rock and roll business. 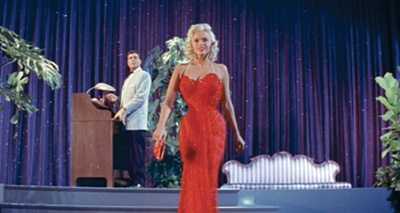 The Girl Can’t Help It is an exception to the general panorama of Hollywood movies that included rock and roll. Directed in 1956 by Frank Tamslin. This is a clever parody of the genre portraying a Jayne Mansfield, who didn’t want to be a star. In this movie, rock and roll is defended against high school and features performances by great stars such as Little Richard, Fats Domino, Eddie Cochran, Gene Vincent, or The Platters. Everything will change with The Beatles and their original A Hard Day’s Night.