Antoine Domino was the serial head of the so-called New Orleans sound. He started very young playing rhythm and blues in places in his city, accompanied by bassist Billy Diamond, who called him Fats.

While making a living from all kinds of jobs, in 1948 he was signed to the Imperial label and began working with Dave Bartholomew. A year later, his first single, The Fat Man, appeared as a true innovation of the piano.

Song composed by himself and Dave Bartholomew. It contains a fast rhythm, inherited from boogie-woogie, which they will later call rock and roll.

Dave Bartholomew, a producer and talent scout from New Orleans, asked Ledd Chud, owner of Imperial Records in Los Angeles, to accompany him to a club where young talent from the city was performing. Chud was impressed with Fats Domino’s performance. Shortly thereafter, he offered him a contract and recorded a single with Detroit City blues and The fat man, whose tune was a variation of the traditional Junker’s blues composed by pianist Willie Hall, better known in New Orleans as Drive’em Down.

In the sixties he transformed his music by incorporating more sophisticated arrangements but he began to decline, eclipsed by the Beatles. He ends up performing in Las Vegas hotels with other rock and roll veterans. 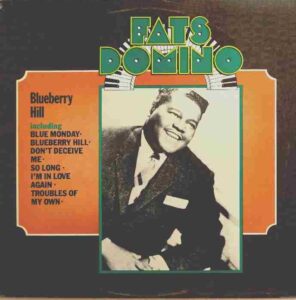 A theme of his own authorship and another of Domino’s successes for the Imperial label. Today a classic of black rock and roll.

Fats Domino used to say that recording albums was no problem for him. In the studio he was as comfortable as he was on stage. With the help of Dave Bartholomew and some great musicians from the city, he developed a very recognizable sound: his cheerful piano rode the characteristic rhythms of the New Orleans drums, with vibrant tenor sax solos after the second or third verse and a lush voice, marked by his French accent.

What is his contribution?

Years before there was any talk of rock and roll, Fats Domino had already had great success playing what in New Orleans was called dance music, which was nothing more than his preview and that of soul music.

With an impressive recording career, he served as a driving force for local musicians, both black and white, and had an impact even on music from unexpected places, such as Jamaican ska. Legends like John Lennon learned from his songs.

Song composed by Vincent Rose, Al Lewis and Larry Stock, in 1940. It was the biggest hit of his career, number 2 on the white lists and number 1 on the rhythm and blues lists.

This is a version of an old song arranged for orchestra that Domino transformed into rock and roll. It belongs to his second stage, in which he gets closer to the mainstream of the time. Between 1956 and 1957, he sold over 5 million copies of the album worldwide. Also at that time he appeared in the films Shake, Rattle & Rock! and The Girl Can’t Help It, both from 1956.  His hit The Big Beat was played in 1957 on American Bandstand, the hugely popular television show devoted to musical novelties, directed by Dick Clark.