Youth, inexperience, hobbies and street performances, lead to a serious formal change from the style of their predecessors and models. They rarely had the support of musicians to help them define and polish the arrangements.

To compensate for this, to some basic barbershop music arrangements they added onomatopoeias with rhythm and took care to braid ornaments that gave support to the main melody. This way they gave a personal charm to their records and performances. 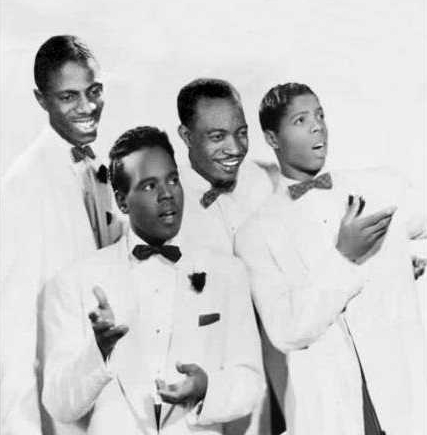 Version of a song composed by Jerome Kern and lyrics by Oscar Hammerstein II. They were another great vocal group that earned a place in the history of popular music.

The Ravens were founded by Jimmy Ricks and Warren Suttles in New York. They were active from 1946 to 1958. Their music was based on the structure of The Ink Spots, to which they added more elements of gospel, rhythm and blues and pop. They are, therefore, the bridge between the first generation of vocal groups, dedicated to jazz and gospel, and the following ones, devoted to rhythm and blues and rock and roll. On the other hand, the use of Ricks’ recorded voice as a soloist was an innovation and became the trademark of his style.

Vocally, it is based on an a cappella sung harmony, where a lead singer is accompanied by a chorus of three or more singers. The range of voices includes: countertenor, falsetto, tenor, baritone and bass.

In the recording process they are accompanied by a minimal studio band. The best producers are those who interfere as little as possible in the group’s original arrangements or those who capture the sound essence of a particular formation.

They perform a song composed by Melvin Anderson and Ricardo Weeks. Another of the great vocal groups of the fifties, in this case composed by white people of Italian origin.

Dion and the Belmonts was a group made up of young New Yorkers from the working class. They were formed in late 1957, when Dion DiMucci joined Carlo Mastrangelo, Freddie Milano and Angelo D’Aleo. They were named after Belmont Avenue in the Bronx neighborhood where they lived. After releasing a first single without success, they signed a contract with Laurie Records. Fame came with the song I Wonder Why, which made the charts and opened the door to the American Bandstand television show.

What is street corner?

With their expansion, these groups sang anywhere on the street that could offer an echo that would reinforce their vocal arrangements. It was then that they were called street corner harmony and later doo wop.

These groups used simple, direct, striking names, tailored to a music poor in means but rich in achievements. Among them, the names of birds stand out. The music critic Mingus Formentor calls them “sweet birds of youth”.

Song composed by Andrew Jones, bass voice of the group. It was here that the onomatopoeia doo wop first appeared, giving this musical genre its definitive name.

The Turbans were formed in Philadelphia in 1953. It consisted of four young people from South Street, at that time the cultural epicenter of the African-American community in the city center. In the spring of 1955, they sent a demo to the Herald Records Company in New York, with which they signed a contract in July of that year. That same month they recorded a single with two songs, including When You Dance, which by November had entered the charts and was a national hit.